“Daffodils – Remembering Together” by Ala Gibki

On the 19th of April you could see many people walking with a yellow paper daffodil attached to their jackets or shirts. Many people wondered what it was all about. On the 19th of April our class 1B organized a social campaign devoted to The Warsaw Ghetto Uprising which took place exactly 74 years ago, in 1943. Before the whole campaign began, we had prepared a lot of hand-made paper daffodils. Why daffodils? – you might ask. Well, they have a symbolic meaning. Every year on the 19th of April Marek Edelman, the last commander of the Jewish Combat Organization, used to lay a bouquet of yellow flowers on the monument which symbolizes The Heroes of the Warsaw Ghetto.

Half of the students went out of the school, the rest of us stayed inside. There were some things that had to be done. We walked round the city handing the paper daffofils to random people and asking them a few questions about the Warsaw Ghetto. Their reactions were very diverse and sometimes surprising for us. Some people knew about the anniversary, they were really happy to talk to us and pinned the paper flowers to their jackets willingly. Others didn’t want to answer the questions and doggedly refused having a photo taken. Some of them had different opinions about the Rising in the Warsaw Ghetto. They kept saying that Jews killed a lot of Polish people during the Second World War and due to this fact they didn’t want to take part in our campaign. Such reactions were an unpleasant shock for us. 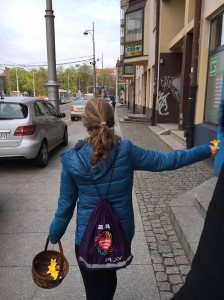 Personally I think it’s very important for us to remember about everyone who died there. They sacrificed their lives to be free, nothing else actually mattered more than this. I believe this campaign was really eye-opening. People should take a lesson, stop for a while and think of these sad pages of history.
And what do you think about this campaign?

This entry was posted in Blog, Home. Bookmark the permalink.

5 Responses to “Daffodils – Remembering Together” by Ala Gibki