“They were here before us and if we’re not careful, they’ll be here after us…” a post by Ala 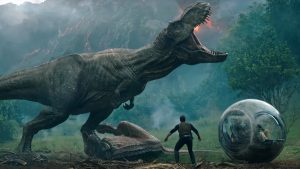 Winter break gave me a lot of free time and I could finally get my well-deserved rest and enjoy watching some movies. I’ve always been interested in dinosaurs. I’ve also been a huge, even a little obsessive “Jurassic Park” fan for many years now and I perfectly remember seeing every single part of the movie for the first time. I’m sure most of you know the whole series as well. Anyways, today I’d like to tell you about the newest movie called “Jurassic World” because I think it’s the best of all of them and I immediately got absolutely addicted to it. It was directed by Colin Trevorrow and the cast includes Bryce Dallas Howard, Chris Pratt, Nick Robinson and Ty Simpkins.

The story starts 22 years after the original Jurassic Park failed. The promise of this movie is that this park exists, it has functioned, it’s successful and it is ‘safe’… until it’s not of course. There is a dinosaur, a genetically modified hybrid. Why create a hybrid if there’re dinosaurs, you may ask. Well, people in the reality of this film are not impressed by dinosaurs anymore. They want them bigger, louder, ‘more teeth’. They wanna be thrilled. Well, don’t we all?

As you all can guess, everything goes terribly wrong, because of this creature, which escapes from its paddock and goes on a killing spree.

I think it’s not only an ordinary action movie; it also asks lots of very important questions and it should make us think, wonder about the future of technology. This movie was created to make us realize how tiny we are. It’s supposed to warn us, as we are not so far away from such situations. Probably not creating dinosaurs, but still. What I mean is that scientist won’t ever be like ‘Remember that time when Jurassic Park or Jurassic World…’, but I’m sure you already get my drift. We are so obsessed with the next, new, big things in terms of progress, that we don’t take the step back and look at the context of everything. We are more focused on evolving our technology, humanity or wisdom. Movies like this one are supposed to make us realize that there are consequences for these things and one day we’re gonna blink and we might lose ourselves. Noone wants to stop progress and progress is essential, but even more important than that is our own evolution. Sadly, we don’t really apply it.

The next chapter of this story is going to come out in summer this year and I’m super excited! To show you how amazing and hilarious the cast is, let me show you a video of my two absolutely favourite actors answering some questions about this movie.

Just to make it clear, Chris Pratt is not an idiot, he just acted out like it. 🙂

I’ve seen lots of videos from behind the scenes, as making such movie seems really interesting to me, so there goes an another video for you 🙂

Have you seen this movie? What are your thoughts? Did you like it? Let me know in comments below!

This entry was posted in Blog. Bookmark the permalink.

7 Responses to “They were here before us and if we’re not careful, they’ll be here after us…” a post by Ala